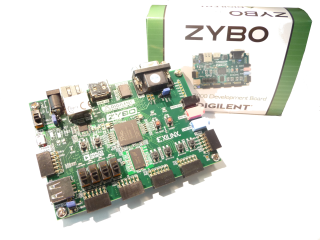 The Zybo board is a powerful low-cost SoC development board. It is based on a powerful Z-7010 chip from the Xilinx Zynq-7000 family and contains many interfaces like audio, Ethernet and USB. The Z-7010 chip also contains a dual ARM Cortex-A9 which makes it easily possible to run an embedded Linux from an SD card. Moreover, six PMOD connectors allow access to the FPGA, the processing system and the internal ADC. Additionally, many different P‑mod modules can be found at the Digilent Store. For more features and detailed descriptions see the Zybo Resource Center. A further reason for selecting the Zybo was the documentation with tutorials and example implementations. They, can be found at the Zybo Resource Center, too. To sum up, the Zybo is a solid and well-documented and supported SoC development board for beginners. 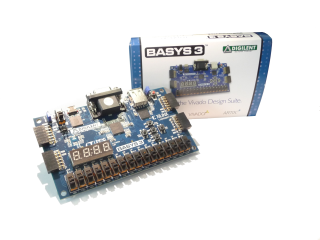 The Basys3 board is also a powerful and low-cost FPGA board. It contains 16 switches, 5 buttons, and four 7‑segment displays. This will give beginners a good entry point into digital hardware design because simple examples can be easily implemented and visually displayed. The internal ADC and the FPGA can be reached via the 4 P‑mod connectors. There are many add-on modules for the PMODs. These modules contain different peripherals which can be accessed by an interface implementation in the FPGA. The modules can be found at the Digilent Store. Further on-board interfaces are VGA and USB which can be also utilized to implement some example designs. For more features and detailed descriptions see the Basys3 Resource Center. A further reason for the selection of the Basys3 was the documentation with tutorials and example implementations, all to be found at the Basys3 Resource Center. To sum up, the Basys3 is a solid and well-documented and supported FPGA development board for beginners.

The selected boards contain connectors that utilize the standardized PMOD interface. This interface can be used to easily connect to peripheral modules provided by Digilent. The modules contain e.g. a rotary encoder, additional seven segment displays, a temperature sensor or an ambient light sensor. The PMOD standard is well documented and its documentation can be found on the Digilent website. In order to ensure a high diversity of student projects a total of 11 different modules were acquired. Table 1 depicts an overview of all acquired modules.

**Important Hint!:**
To connect a PMOD module to the Zybo board, always use the PMOD connector that is labeled with “JE” (connector in the bottom left corner of your Zybo FPGA base board) since this connector provides series resistors for short-circuit protection. The other PMODs can also be used but be careful, because they are not protected against a short-circuit. On the Basys3 board all PMODs provide series resistors (expect the PMOD "JXADC", which is connected to the XADC).